“James Bond” star Pierce Brosnan is shooting for nine figures in Malibu, where his Thai-inspired retreat on Broad Beach just hit the market for $100 million.

The mammoth price tag makes it the eighth-priciest home on the market in L.A. County. If it sells for anywhere close to $100 million, it’ll mark a massive return on investment for the Irish American actor; records show he compiled the compound in 2000, buying one lot for $5.1 million and another for $2.25 million.

The oceanfront retreat spans more than an acre with two homes that combine for five bedrooms and 14 bathrooms. Past a pair of carved teak gates, the verdant grounds are filled with palm trees, tropical flowers, travertine courtyards and wraparound lanais. 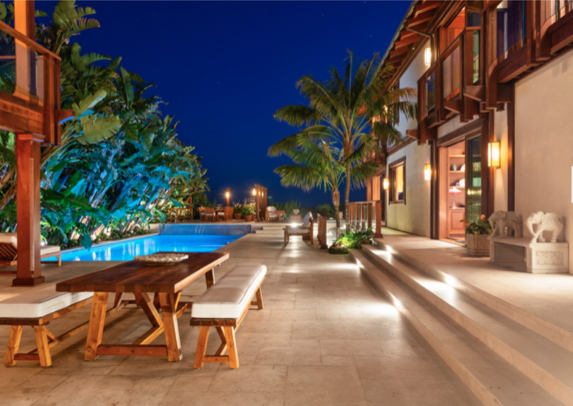 Known as Orchid House, the main home boasts interiors lined with glass and teak that take in commanding ocean and mountain views. On the main level, there’s a great room and a kitchen with white crystal counters. Amenities on the lower level include a theater with tiered seating and a music room/recording studio. The spa adds two saunas, a steam room, Japanese soaking tub, cold plunge and shower.

Sandy lounges and glass-enclosed dining areas dot the backyard, which centers on a saltwater pool and descends to 117 feet of beach. The two-story guesthouse also serves as a pool house with a bar.

Brosnan and his wife, activist and journalist Keely Brosnan, have put the property up for rent multiple times during their stay, once listing it for $120,000 a month back in 2004.

Brosnan, 67, starred in four James Bond films from 1995 to 2002: “GoldenEye,” “Tomorrow Never Dies,” “The World Is Not Enough” and “Die Another Day.” His other credits include “Dante’s Peak,” “The November Man,” “The Matador” and “Nancy Astor,” the latter two of which earned him Golden Globe nominations.

Thank you for contacting us, we'll get back to you shortly.

Sorry, we are unable to send your message at the moment. Please try again later.